The reason that the cap rail was removed and re-bedded was because of water leaks along both sides of the boat that were traced to the hull and deck joint.

The original caulking had evaporated leaving the joint open to rain and salt water.  Even though we had squeezed more caulking between the inner and outer edges of the mahogany cap rail and the hull and deck, water continued to find its way into the boat.  Apparently the pop rivets that were used to hold the joint in place during construction, through bolting and eventual curing of resin were exposed to salt water and corroded, leaving an ingress for water.

We made the decision to remove the existing cap rail, strip it, re-bed it, replacing any needed hardware and re-varnish it.  We planned for a long weekend to finish each side.  The entire project took more like 5 weeks!

To make the job as easy and accessible as possible we first cleared the decks by removing all the stanchions, man overboard pole, life sling, genoa cars, etc. from the work area.  All the bungs were removed, exposing the self-tapping cap rail screws that held the wood in place.  The screws were removed, and any that were corroded were replaced with new stainless steel screws.

The genoa track and a couple of other pieces of hardware (previous owner additions) needed to be removed that were through bolted.  In order to get to the genoa track (and other hardware) bolts, the drawers, locker contents and doors and walls were removed from the salon to the aft cabin.  This included the wooden covers to the main shroud chainplates and the outer wall of the sail locker, the electrical panel and liquor cabinet shelving. 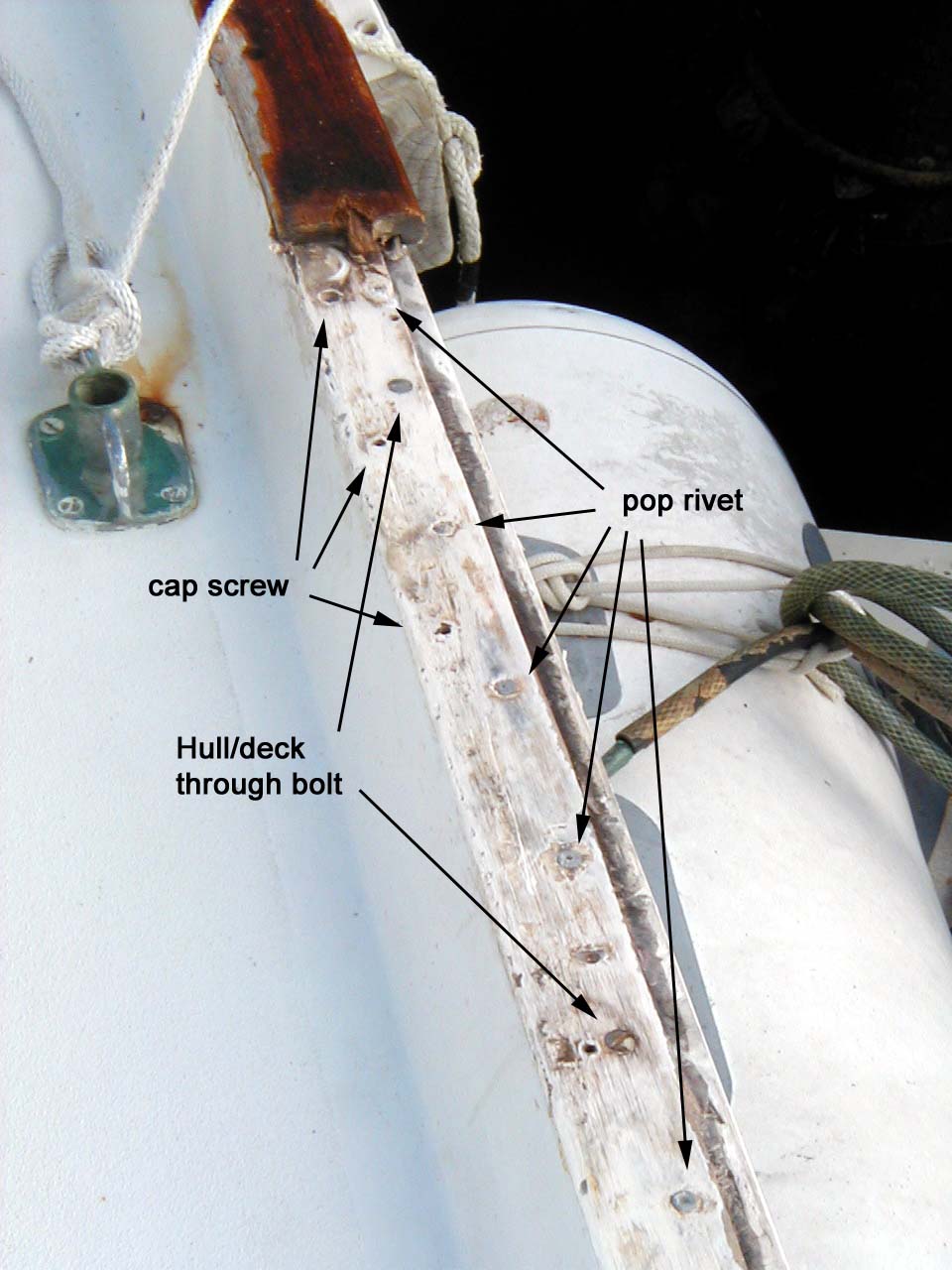 This proved especially inconvenient, as we live aboard.  Because of this, we attempted only one side of the boat at a time.

By removing the walls, it provided access for one person (albeit twisted up like a pretzel while being stretched to the max) to hold a wrench or socket on the nut while another person was on deck with another wrench or socket unscrewing the bolts.  The nuts are found on the outer most part of the hull, highest up in the groove, essentially inaccessible by anything other than feel or visually by mirror and flashlight.  Any nuts or bolts that were corroded, cracked or broken were replaced with new stainless steel ones.

Once the wood was removed we stripped it using a 3M paint and varnish removal wheel attached to a drill motor.  That was also used on the hull and deck joint itself, to remove any old caulking and also to clean up the genoa track.   Since the track was mahogany rather than teak, 400 new bungs were made.

The cap rail was re-bedded using Lexel (which we swear by!) and screwed into place.  The genoa track, and all the related through bolts (and other hardware) were put back in place.  The new bungs were put in place and the wood was sanded and Honey Teak was applied.

Through bolts for the hull to deck joint were found the entire length of the boat, both sides, approximately every 12 to 16 inches apart, except where the genoa track was, and there the bolts were every 6 inches.