Brewer 44 Andiamo gets a new engine 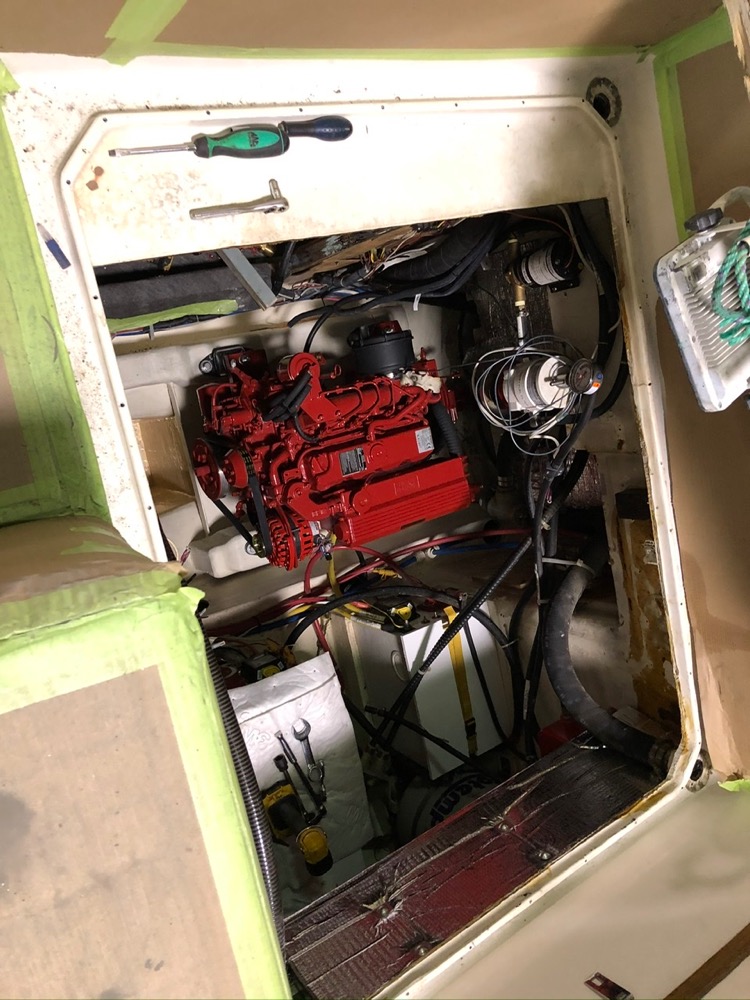 Less More
6 months 1 day ago #3268 by Mark Popiel
Replied by Mark Popiel on topic Brewer 44 Andiamo geets a new engine
Cool. Thanks for sharing that. I think many of us would be interested in more details of your repower project.

Less More
6 months 1 day ago #3269 by DAVID JONES
Replied by DAVID JONES on topic Brewer 44 Andiamo geets a new engine
+1 - more details of your project would be very welcome. the Beta's are great engines. I hope you get many more decades of trouble free use!

Less More
6 months 2 days ago #3272 by Gino & Carolyn Del Guercio
Replied by Gino & Carolyn Del Guercio on topic Brewer 44 Andiamo gets a new engine
Here are some more details on the repower:
While the original engine, a Perkins 4.236 was still running well and not burning oil, many of the ancillary parts such as the starter, heat exchanger, exhaust elbow, water pump and more were failing, so I felt that I was constantly fixing or babysitting ailing parts and since we've been living on the boat for the past three years and cruising long distances, this was getting to be a drag. In addition, with 7,000 hours on the engine it was time for an overhaul, which was going to be expensive since I don't have the expertise to do it myself.
So my wife and I decided to bite the bullet and repower.
I chose a Beta Marine 60 because of its simplicity and reputation for being a great reliable engine. At 60 hp, its 24 hp less than the Perkins, but I felt the Perkins was more powerful than the boat needed. I never drove the engine at full power because the stern would just sink and the engine would eat a lot of fuel.
The new engine would have several advantages: more fuel efficient, more reliable, with a serpentine belt it could drive a 175 amp Balmar alternator and thus recharge my batteries faster, and I like the way Beta Marine has put all the important parts, such as oil dip stick, oil filter, fuel filter, etc on the starboard side where they're easy to reach.
Rather than try and do this complex job myself I decided to have a yard do it and I chose Johanson Boat Works in Rockland, Maine, because their rates were good and I got a good feeling about the owner and staff when I met them. I've been very happy with the work so far.
Of course boat work never goes as planned and the project has become significantly bigger than I originally envisioned. For instance, they discovered that the prop shaft was badly worn at the stuffing box, which explains why it had become impossible to slow the leak, and the Max Prop was badly worn and needed to be replaced. In addition, four of the seacocks had to be replaced.
To get the engine aligned properly the beds had to be modified and the alignment was tricky. I'm so glad I didn't try and do this job myself.
All in all, the engine cost a little shy of $20,000 and the install will probably be about $15,000. I was able too sell the old engine on eBay for $2,500 which helped offset the price a little bit. So the repower was not cheap by any means, but I figure that when we're entering a harbor in big seas the peace of mind of having a new, professionally installed engine will be well worth the price.
If anyone has any other questions about the install feel free to ask.

Less More
6 months 2 days ago #3274 by DAVID JONES
Replied by DAVID JONES on topic Brewer 44 Andiamo gets a new engine
I have never seen an engine repower "go according to plan". There is always something... But look at what all you discovered that could have caused you serious headaches if not fixed! You'll also probably notice that the Beta is quieter than the Perkins was. It also runs at different RPMs and the sound is noticeably less intrusive, at least it seemed that way to me on a recent repower with a Beta.

You should definitely enjoy that new engine and installation!