This is a service provided by Google called Feed Burner. To unscbscribe, follow the "unsubscribe" link contained in the emails you receive from Google containing the forum posts.

The Whitby and Brewer Sailboat Association

We are a group of sailors who own, use or are interested in Ted Brewer designed boats primarily focused on Whitby Boat Works Whitby 42 and 55, Ft. Myers' Whitby 42, Brewer 42, 44, and 12.8. The goals of the Association are simple: learn, share and help others learn about, maintain, repair, sail and enjoy their Ted Brewer designed boats. While there can be significant differences between models - and often variations between boats built successively - all share similar characteristics.

Each year the Association members hold an annual meet in the Annapolis, Maryland area. The Rendezvous is held approximately the week prior to the Annapolis Sailboat Show.

We are an informal all volunteer group. The web site, email list-server, annual rendezvous organization and newsletters have been created and maintained by many individuals who have contributed their time, efforts and in some cases money, to further the Association's efforts. Our members include circumnavigators, cruisers, live-aboards and day sailors of all levels of experience. Members have rebuilt, repaired, refurbished, replaced, upgraded and fixed all items on and in these boats. There is almost no question that can be asked that won't have an answer by someone who has researched and answered that question to their satisfaction.

There are no fees to use this site. We ask that you read and abide by the rules for the site and forum.

If you have questions about the Association or would like to become more involved, please contact us.

Another year of fun and sharing! There’s a lot we can learn from other sailors with the same boats and a wide variety of experiences. An important lesson from this year is how long it takes before we’re talking about the ship’s head. (For non-sailors, read “toilet.”)

For the 2018 edition of the rendezvous, we had four boats at the dock of the West River Sailing Club:

We had almost two dozen attendees reflecting — perhaps — a dozen boats. James and Christine won the prize for coming all the way from Calgary, Alberta, some 2,300 miles. We keep Red Ranger at Herrington Harbour North, so our trip was about 15 miles: 3 hours by boat. Shooting Star and Wild Outs, similarly, are close by. Allegria, however, came down from from Newfoundland.

Some Whitby-emeritus owners (Ted, Alice, John, and Mary) live in the area so, they win the prize for shortest distance traveled.

There are some key ingredients for a proper rendezvous.

Introductions. And a boat card exchange. We all describe our boat and our favorite locations. We get to meet the folks we don’t know, greet the folks we've met before. We learn about folks new to the group, and new to their boars, as well as the folks with thousands of sea miles under their keels.

Boat Tours. With four boats at the dock, we can swap ideas, and learn from each other. I’ve seen these three boats several times before, and I’m starting to understand some of the smaller differences between them.

Program. Ruth of Shooting Star built an amazing program this year. She seems to know a huge number of cruisers, and invited lots of them to speak.

Day two was just as informative and helpful:

And then we moved on to visiting boats, having hors d'oeuvre and then eating a delightful dinner.

An associated event can help. In this case, the Annapolis sailboat show starts the next day. Some of use will sail up to Annapolis to make last-minute purchases before heading south.

A bonus this year was yoga at 07:00 both mornings. CA finished her instructor training at Blue Nectar recently.  The morning program was designed to build up some strength and flexibility based on the kind of activities common on a sailboat.

Whitby 42 - A many-faceted boat known by many names 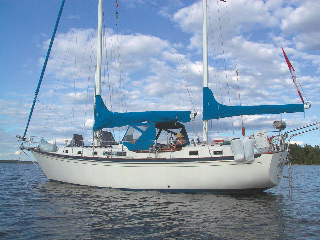 Ever have one of those conversations during which you wonder if you and other participants are speaking the same language or discussing the same topic? Actually, those can be fun when you're speaking with someone whose pronunciation makes “hail" sound like the place in which sinners reside.

I recently endured such an experience while discussing the attributes and merits of the Whitby 42 with several owners.

“What I really like is the bowsprit and cutter rig," one says.

“My boat doesn't have a bowsprit," another responds.

“Well, I really like the centerboard because it allows me to get into shallow anchorages and improves performance to weather," a third voice adds.

Brian Stewart's Whitby 42, Pilgrim, awaits the return of her crew, above.

“Centerboard! What centerboard? My boat has a full, shallow-draft keel that only draws 5 feet," adds a fourth.

Read more: The Whitby 42 - A many-faceted boat known by many names by Ed Lawrence